Alfons Maria Mucha (24 July 1860 – 14 July 1939), known internationally as Alphonse Mucha, was a Czech painter, illustrator and graphic artist, living in Paris during the Art Nouveau period, best known for his distinctly stylized and decorative theatrical posters. His gorgeous posters , which can be called “magic of lines,” continues to fascinate people all over the world even now. 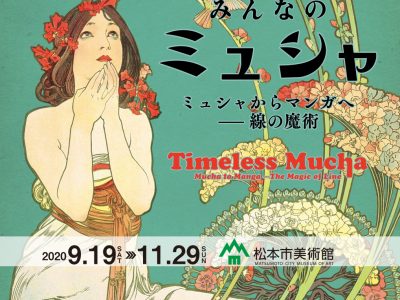 The exhibition “TIMELESS MUCHA  Mucha to Manga – the magic of line“ takes place from Sep 19 to Nov 29 at Matsumoto city museum of art. There are not only graphic works such as posters by Mucha, but also Japanese literary magazines that were strongly influenced by his works, and graphics that caused a major movement in the West Coast of the United States and London, mainly in the 1960s. Along with Mucha’s works, the highlights of this exhibition are the many Japanese literary magazines, manga, and illustrations that were influenced by Mucha. Approximately 250 works including art works and works by Japanese manga artists and graphic artists are exhibited.